Good Lord ... if TUPOC's William Komer were any more of a cheap-ass grifter, he'd be Sarah Miller: 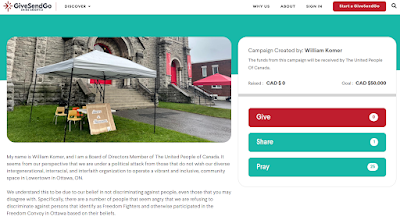 I take it he does not understand how much of a twatwaffle he sounds like when he uses "It seems from our perspective"...

One gets the feeling that his "legal council" thinks this is a clever way to have plausible deniability.

William Komer is not under political attack: people have had enough of white nationalists, neo-nazis, the alt-right and their hate.
There are not "freedum™ fighters" or anything laudable.
At least, from my perspective (lol), that Komer is admitting that they are Klown Konvoyers...


Scumbags should never be tolerated.

I sent them a prayer using a fake name and disposable email addy. It was the least I could do.

Ah, that's nice. On that page, Komer has volunteered himself to be roasted (I assume NOT involving a spit-roast) by his "opponents", but HE chooses the time and dates these occur. I'm guessing it will happen sometime around the 15th of No-Never.

TUPOC: We refuse to discriminate*.

*Offer not available for LGBTQ+ community and locals who can't appreciate the Freedom Fighters who took over their city and turned it into a noisy toilet for a few weeks. Not to mention shutting down three international border crossings for "freedom".

Sounds like when Saddam Hussein told dissidents all is forgiven, come home.

Meanwhile Nolan is having some kind of breakdown: