As I opined recently, Rebel News' Sheila Gunn Reid and her personal barrister Sarah Miller are grifting over $15,000 for what Sheila herself describes as two economy round-trip tickets to Geneva, where they plan on staying only one night, long enough to thoroughly embarrass themselves at the United Nations.

Why Sheila needs over $15K for this is unclear since, as I just confirmed and as you can see below, you can right now book -- on absolutely no notice, that is, leaving later today -- an economy return ticket for: 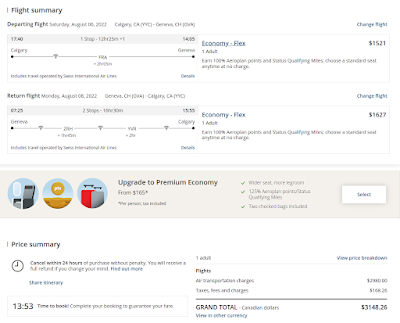 Understand something: this is a scam. Plain and simple. On the other hand, it is Sheila so it is in no way surprising.

P.S. Just to play it safe, this is my assurance that I will publicly apologize to Gunn Reid and retract my description of the above as a scam the instant I am provided with legitimate receipts showing the cost of the above (in Gunn Reid's exact words, cost of "the flights, the humble accommodations, and meals") as more than $15,000. I think that's only fair.

INTERESTING ... anonymous e-mailer suggests that Gunn Reid could suggest she's being defamed if she never claimed that they needed over $15,000, only that they were raising $15,000. Um, no:

She clearly claims that the trip will cost "more than $15,000," so if she wants to take umbrage, she will have to provide receipts.

In unrelated news, anyone know how Sheila is paying for her lawyer to fight her contempt of court charge? She could always hold a fundraiser, I guess.

HOLY CRAP: Another anonymous e-mailer insists that he read somewhere (but can't remember where) that the $15,000 cost of the above delightful European getaway includes the legal bill from barrister Sarah Miller for preparing the complaint.

If this is true (and I stress, if), that means that Miller is charging in excess of $10,000 for having prepared this, which is -- and how can I put this charitably? -- absolute shit. Seriously, it is utter, unreadable rubbish, and even the thought of someone charging in the thousands of dollars to have written that rancidly misleading swill is nauseating.

In any event, the invitation to produce receipts remains open.

I don't see how Sheila can fold Miller's legal fees into the $15,000, since you can see she writes:

"Between the flights, the humble accommodations, and meals, this project will cost us more than $15,000, ..."

Any normal reading of that would be interpreted as saying that those expenses represent the ENTIRETY of the $15,000 cost. If Sheila turns around and changes her story and admits that the $15K also included Miller's exorbitant legal fees, that's just fraud. There's no other way to describe that.