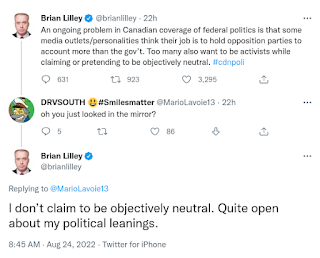 P.S. Given Lilley's open admission that he is nothing more than a biased political hack, why should any legitimate press conferences grant him press credentials? I'm not being facetious -- now that Lilley has announced to the world that he is a right-wing attack dog with no interest in objectivity or neutrality, what obligation does anyone have to accredit him?
Posted by CC at 7:38 AM

I'm surprised that anyone thinks conservative fart-catcher Lilley has even remotely been a "journalist" - he's been a con propagandist from day one.

Brian, Sheila, Ezra and the other Rebel and Rebel alumni point to the fact that they acknowledge their bias as though that somehow excuses them from any of the principles or practices that real journalists struggle to achieve. "Yes, I've simply given up on even TRYING to achieve balance, accuracy, honesty and objectivity. But that's okay, because I'm admitting it."