Right-wing media outlet that has, for years, relentlessly howled "FREEDOM!!" will now insist that other countries have no right to determine who enters: 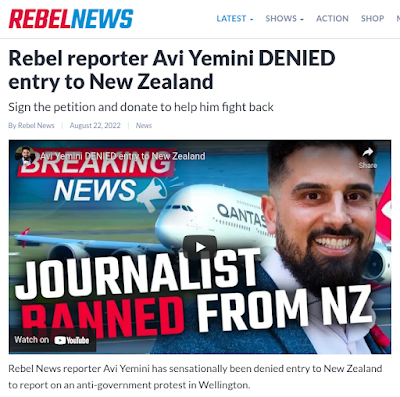 Banned from New-Zealand for being a wife beater.

And yes, they are grifting for something that they cannot appeal.

I'd never heard of this guy, so I Googled him:

The Australian Jewish News described some of Yemini's "bedfellows" as "unsavoury" (referring to Yemini's relationship with convicted antisemite and former neo-Nazi Neil Erikson), noting that "comments that he and others have posted on his Facebook page reveal a tendency towards the far right that does not sit comfortably with a people who have traditionally been first in the far right’s firing line."[41]

Victorian state Jewish Labor MP Philip Dalidakis has called Yemini “an opportunistic far-Right reactionary’’ who “stands for nothing other than creating hate, fear and anger’’.

This guy's an Australian version of Ezra.

One easy way to tell the difference between a real journalist and a grifter (or organization of grifters. Not saying any names *cough*rebel news*cough*) is how many stories are about the journalist themselves.
Seems like a solid 25% of rebel news articles are about one of their own provocateurs (I'm not going to honour those frauds with the title of "journalist" or even "writer") are being WRONGED in some horrible, terrible, no-good way. Followed by an appeal for cash, as you pointed out, CC.

Anon @ 11:12 PM: One commenter some time back described it perfectly: He characterized Rebel News as not so much a media outlet as Ezra Levant's "vanity blog", which makes perfect sense -- more than anything, Rebel News' favourite topic for coverage is ... Ezra Levant and Rebel News.

It's self-obsession and narcissism writ large.

Yup. "Look how important I am. View my vast kingdom of a handful of hangers-on that I've blessed with the ability to low-effort grift on an extremist subset of Canadians."
What's fucking embarrassing is that I used to fall for this shit. Back in the early 90s, I read BC Report Magazine, and thought it was brilliant.
Granted, I was a teenager/early adult who was raised in a white-supremacist adjacent evangelical church. I got better.

Anon 3:47. I always envy people in a certain way who were able to do their teenage rebellious years by simply being normal.