Man who spent his entire adult life sucking off the public tit and who has a lifetime pension funded by the taxpayers will now bad-mouth the idea of socialism: 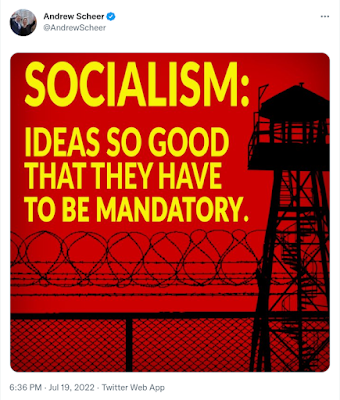 Conservatives have always believed in socialism for me but not for thee. Hence the opposition to it being mandatory.

Now, now, let's be fair and recognize the three months he answered phones at Shenher Insurance in Regina.

I love how conservatives are all about "pulling yourself up by your own bootstraps ... except when it's them, in which case leeching off the taxpayer is just fine.

Well I guess he thinks everyone should pay their own way like with his kid's tuition and his minivan.

Given that we live in a mixed economy... maybe Scheer should move to his dream country of Somalia.

Take the rest of the Conservative freeloaders with him also.

Why not El Salvador? I think bitcoin is legal tender now there


So Andrew Scheer got a taxpayer paid employee to post this using Government equipmen... Irony just killed itself.

What is scary is that his ilk are close to the levers of power for Canada.
Even scarier is how much he lied and was still elected.
Conservatives really have no shame.

Socialism is an economic system where the means of production (broadly defined) is held by the state rather than by private owners.

By this definition, Canada is not socialist.

Thus I see no contradiction on the part of Scheer.