Ah, the purchasibility of Rebel News.

It's amusing to watch Ezra Levant and the intellectually deficient trogs at Der Rebel screech about how the rest of the media is bought and paid for, when Rebel News itself does not even attempt to hide the fact that it sells favourable coverage to the highest bidder.

I refer specifically to an email I just got on the Rebel's mailing list, clearly purchased by Maxime Bernier and his collection of morons at the PPC:

From: Maxime Bernier — Leader of the PPC <info@rebelnews.com>

Subject: SPONSORED: We must stop the WEF

We must protect Canada from this globalist postnational scheme supported by Justin Trudeau. ... snip ...

That would be sponsored content, apparently paid for by the Peoples Party of Canada and disseminated via Rebel's massive (and highly rentable) database of marks, rubes and suckers.

This would, of course, not be the first time Ezra and database were for sale as long as you brought your chequebook, as Press Progress once exposed Kellie Leitch as having handed over an assload of money to Ezra for delightfully gushing coverage:

In any event, it's a little untoward for Ezra to be kvetching constantly about how everyone else is beholden to Justin Trudeau due to federal funding, when Ezra himself happily slants the news based on whoever can hand over the largest bag o' cash.

BONUS TRACK: I'm sure it's just a coincidence that Der Rebel published a pathetically pandering piece about "Canadian values candidate" Leitch on February 22, 2017:

only to have Leitch hand over a total of $22,600 just two days later (as you can see above). I'm sure we shouldn't read anything into that, right? Right?

WELL, THIS IS TIMELY. Commenter brings to my attention Rebel News' Adam Soos, touting an "exclusive" interview with certifiable loonbat Danielle Smith, which allows us to make a couple observations and ask a couple questions. 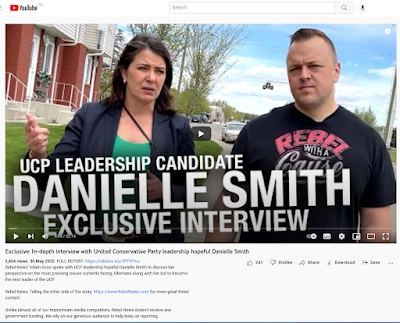 First, what means "exclusive"? Is Smith suggesting she will absolutely not sit for interviews with any other media outlet? I find that hard to believe, so who the hell cares about the "exclusive" label on this stupidity?

Next, I think we've already established that the only people who offer up their time to the hacks at Rebel have already been assured they're about to be stroked and pampered.

Finally (and most interestingly), at the bottom, you read the ubiquitous bragging as to how:

"Rebel News doesn’t receive any government funding. We rely on our generous audience to help keep us reporting."

And, as we have already seen, this claim is obvious nonsense, as Rebel News is clearly happy to take funding from politicians in exchange for delightfully adulatory coverage.

So much grift, so little principles.

Why do we get the idea that Danielle Smith may have made a recent purchase from Rebel News?

If only Harper had been in power when the pandemic hit. Kellie would be answering the barbaric practices snitch line, where she would get one million calls a day, about yet more people wearing face coverings! In public!! Indoors!!! We're being invaded!!!!

They're trying to make her look good, and they couldn't lead with a more flattering picture than that? She looks totally grim and grouchy. Morals are clearly not the only problem on display here, the competence issue is showing as well.