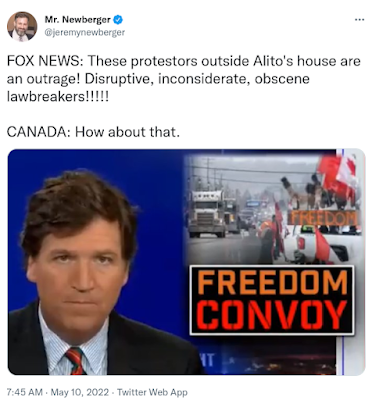 They should throw the book at the USSC justices. Specifically the Bible. Maybe then one of them will bother to read it. They only need to read page 1 which makes it pretty clear.

Genesis Chapter 2 Verse 7
"Then the Lord God formed a man from the dust of the ground and breathed into his nostrils the breath of life, and the man became a living being."

So at one point, Adam existed, had been created, yet was not considered alive in the eyes of the Lord. Presumably at that point Adam had lungs, nostrils, bones, blood, a heart which would likely be beating, all needing only one thing to be alive. Air.

Fetuses do not breathe air. According to the Genesis account, you are alive in God's eyes when you breathe. This symbolic act is played out literally, about 30,000 times each day. The most nerve wracking part of a birth is not the labour or the delivery (for everyone but the mother). After the fetus emerges from its mother, there is a "pregnant pause". Slap the bottom or tickle the toes, nobody in that room breathes until the baby does. Only then are they weighed, measured, footprinted and given a government registration number as an individual.

I think it is a reasonable compromise to give full rights as an individual as soon as you are no longer living inside another individual. Life began about 1 billion years ago. Legal personhood starts at birth. We are not conceived free. We are born free.