It's hard to believe I admire Pierre Poilievre for something.

From the diseased brain of white nationalist Keean "Beaker" Bexte, we learn that Pierre "Skippy" Poilievre had the good sense to tell the Independent Press Gallery (IPG) to stuff it: 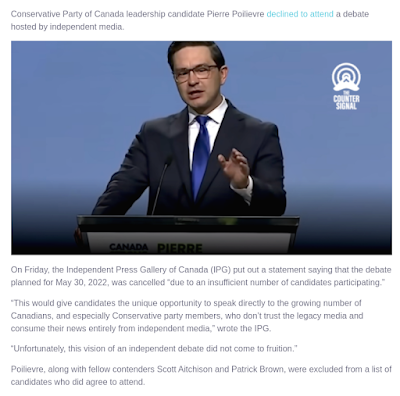 And if you want to understand Pierre's thinking, it's because the IPG is a collection of unaccomplished, self-absorbed, dishonest hacks and trolls masquerading as a journalism organization and, the last time I looked, its entire membership consisted of:

and a more disreputable sack of journalistic garbage would be hard to find. So I will hold my nose and praise Pierre Poilievre for telling that sad collection of pretenders that he had better things to do than be quizzed by petulant children cosplaying as reporters.

I'm not sure I understand as Skippy often contributes to The Post Millennial...

Nah. No respect due at all. Poilievre is simply a consummate opportunist who weighs every step, statement and position against the short term advantage it confers rather than an hint of actual principle.
He's drawn every policy he has from the Rebel and its mindset - defund the CBC, fellate the truckers, go crypto, BOO Davos, etc. But he's realized that in the next stage - the actual federal election campaign...too close a visible association with the Ezra/IPG pack won't look good.

Who would he have debated? Nobody else except for maybe the People's Party and some other right-wing fringe parties would have been there.