Given the utterly inconsistent and self-contradictory statements coming out of the Ottawa police and the mainstream media, I will ask a simple question and invite y'all to weigh in.

Q: Will Ottawa police open up Wellington and allow fascist bikers access to "protest" on the Hill this weekend?

WELL, THIS COULD GET INTERESTING: 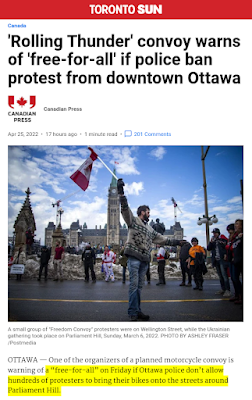 I say "interesting" given that the Ottawa constabulary released a statement describing how they planned on handling several hundred violent white nationalists on loud bikes, and specifically called out the unacceptability of "threatening or intimidating behaviours":

Maybe it's just me, but publicly telling Ottawa police that any attempt to control that gang of thugs will surely end in violence strikes me as just a wee bit threatening.

Over to you, Interim Police Chief Steve Bell.

Q: Will Ottawa police open up Wellington and allow fascist bikers access to "protest" on the Hill this weekend?

A: Yes. Very yes! Hell, the OPS might be nice enough to have the hot tubs and bouncy castles all set up and ready for them to use when they arrive there. The only question is how long they'll overstay their welcome. I doubt it will be three weeks, but who knows?

Listen to this asshole deny that Chris Sky, who is on their poster as a featured speaker at 2pm, has anything to do with Rolling Thunder.