It's worth pointing out yet again that Ezra Levant and Rebel News are crowdfunding to fund an alleged "lawsuit" that is nothing more than a request for judicial review that costs nothing to file.

Oh, and there's this ... Ezra is suing to be eligible for government financial support, even though he brags about being a member of the utterly bogus "Independent Press Gallery of Canada": 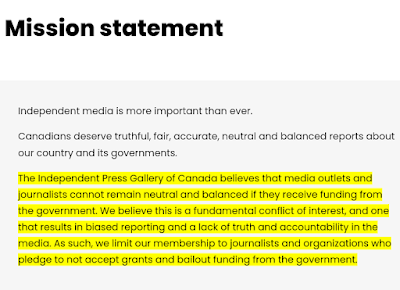 In short, Ezra Levant is currently raking in millions for something that:

I'm sure you're shocked.

P.S. I will also point out that Rebel News is putting Canadian taxpayers on the hook for hundreds of thousands of dollars by laundering its donations through the massively sketchy "Democracy Fund", even though CRA regulations are crystal clear that a CRA-registered charity absolutely cannot let other organizations piggyback on its charitable tax status:

I can assure you, the Canada Revenue Agency is aware of these shenanigans, and they have chosen to do nothing, for reasons known only to them.
Posted by CC at 7:00 AM

Complain to your MP about the CRA's negligence re: Democracy Fund. I'll include it in my email to my MP about stuff that's grinding my gears which I will send today.