Is any enterprising investigative journo digging into "The Democracy Fund?"

Your humble scribe has written about this incredibly secretive and sketchy Ezra Levant-associated registered CRA charity on a number of occasions, but in all of this, we keep coming back to a simple observation: There is no question that, since neither Ezra Levant nor Rebel News is an official charity under CRA regulations, Der Rebel is aggressively fundraising by directing potential donors to TDF with the promise of charitable tax receipts.

And here's why that should be a problem:

That is the Canada Revenue Agency, making it absolutely clear that you cannot, in any way, volunteer to act as a proxy or passthrough for someone else for the purpose of dispensing tax receipts to donors who would normally not be eligible for them. Which is, by every imaginable metric, precisely what Ezra and Rebel News are doing -- piggybacking off of TDF's charitable tax status to hand out what appears to be many millions of dollars in tax receipts for donations to fundraisers clearly and obviously run by Rebel News.

If there was a textbook case of the violation of this CRA regulation, this would appear to be it. So why is CRA allowing this to go on?

Perhaps someone can ask.

P.S. Ezra Levant and The Democracy Fund shamelessly take advantage of the humanitarian crisis in Ukraine to data mine and add more content to their mailing lists in 3 ... 2 ... 1 ... ah, there we go: 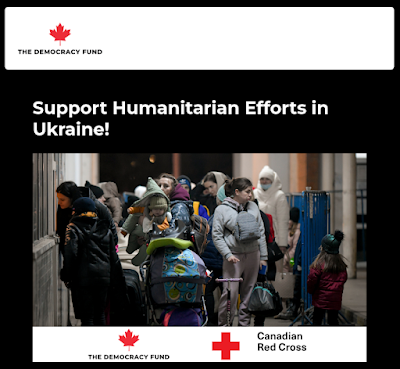 On a related topic, how the hell does the True North Centre maintain its charitable status?