I'm not sure if people truly appreciate how all this trucker vaccine mandate freedom stuff is pure fiction; rather, what we're seeing is a co-ordinated and well-financed right-wing movement to overthrow the current Liberal government. Don't think so? Here, let me prove it. 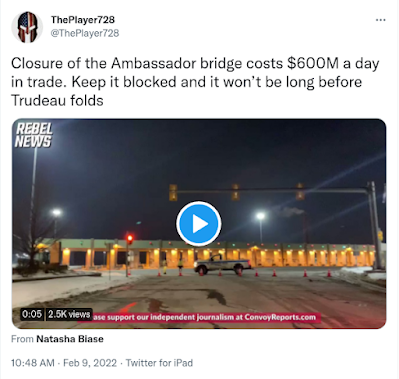 Examine that carefully. What do you see? Here, let me translate:

"Sure, blocking the Ambassador Bridge is costing hundreds of millions of dollars a day, and throwing international trade into chaos, and inconveniencing hundreds of thousands of Canadians, but it's all worth it if we can just embarrass Justin Trudeau."

Closer to home, we have human garbage Brian Lilley going down the same ugly road: 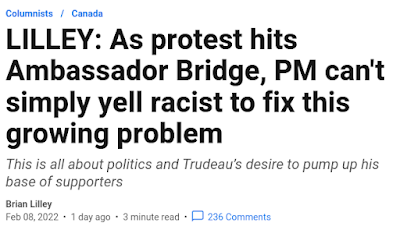 Let me translate that as well:

"Sure, it's all a horrifically expensive international debacle, but all that matters is that it might humiliate Justin Trudeau."

Are you starting to see the pattern? Who gives a shit about the nightmarish occupation of Ottawa, and the abuse and torture of its residents, and the ugly siege of Coutts, Alberta, as long as we tweak Justin's nose because that's all that matters, and fuck the cost.

And Brian Lilley is a piece of shit. I just thought I'd throw that in there.

This is where the Canadian public NEEDS to be better informed with facts.

The truckers/organizers want to meet will all federal political leaders. That is a subversion of democracy.

The demonstration is Ottawa is unlawful. Not sure why it was tolerated even for one day. Conservative quislings have supported that.

Residents of Ottawa needed to court to court for a noise injunction, when that should have been the job of the city of Ottawa to enforce the law.

You have right-wing extremists that have been able to latch on to a Pandemic fatigue with populist claptrap.

The truckers/organizers are well funded with considerable US funding. Normally they would be pissing blood in outrage at "foreign intervention".

The groups protesting are basically anti-vaxxers and anti-Trudeau.

For years I have said that there should be no room for the intolerant in a tolerant society. We are seeing the results of being too lenient with right-wing extremists.

Of course, it wouldn't really matter who was the prime minister of Canada. One of the hallmarks of the far, proto-fascist right is defining anyone and everyone whose politics are different from their own as not just opponents, to be opposed within the existing social rules and political system, but as evil enemies, to be eliminated by any means possible, whether legal, illegal, dishonest, violent . . . everything becomes justified.

Add-on note: Fascists only win when society is pretty unstable. Even if everyone knows it's mainly their FAULT it's unstable, this kind of "flip the table, ignore being civilized" approach gets them closer to their winning conditions. Unless they're stepped on good.
Mind you, stepping on them good isn't enough. They're a symptom as much as a cause; if the real problems aren't fixed, this kind of movement will keep on coming into existence, one part organic discontent, one part people profiting from the problems creating distraction.

These idiots in Windsor are costing people jobs by blocking access to an international border. Call out the army if the local cops, OPP and RCMP are afraid to get their hands dirty. Remove the vehicles blocking the border by pushing them off the bridge into the Detroit River if necessary.