Random musings on Ezra's current legal spat with Farhan Chak as described here, and it occurs that Ezra might be in way more trouble than he thinks, based on what is reported about his lawyers' legal strategy:

Now, while fair comment and responsible communication are both available defenses in a defamation action, there is a problem here, as I will now explain.
Perusing here, we find the opening explanation of "fair comment," most of which I chopped off because it is only that first sentence that concerns us:

You see, that opening sentence makes it clear that fair comment applies only to issues "of public interest." And what does that mean, you ask? I'm glad you asked.
It means that what is being uttered or written must inherently have a interest to some segment of the public. It is not enough that some of the public might be interested, that's not how it works. Rather, the content must, in some way, be relevant or timely or meaningful to at least some members of the public, and this is where it seems Ezra is going to have a problem, since there is absolutely no evidence of "public interest" here.
Given that the shooting happened in 1993, and that Chak was acquitted in 2007, and that Chak further moved from Canada to Qatar in 2008:

while I am not a lawyer, I submit that it would be exceedingly difficult to argue that any of that was suddenly in the public interest six years later in 2014 when Ezra mentioned it on his TV show. It's not as if the public was clamoring to know what became of Chak, and it's also fairly obvious that, when Ezra mentioned it, he had absolutely nothing new to add to the discussion. Quite simply, there is no persuasive evidence that any of what Ezra said about Chak had any component of "public interest" whatsoever, and if Chak's lawyers don't hammer that point home, they're doing it wrong.
Amusingly, Ezra's defense of "responsible communication" would appear to fail for precisely the same reason:

In fact, Ezra seems in even more trouble here, since a defense of responsible communication openly requires that the content be "urgent, serious, and of public importance," none of which applies here. Again, one simply cannot argue public interest for an event that happened years earlier of which pretty much no one has spoken until Ezra decided to spew it off the cuff on a TV show for no reason, years after the fact.
It appears that Ezra has other problems in this case as well, but front and centre, Chak's lawyers should be absolutely pounding home the point that, absent any evidence of public interest, most of Ezra's defenses are as dust in the wind.
Someone should point that out to them.
AFTERSNARK: In case you were wondering, it would seem that Ezra does not have a hope in hell of arguing that third defense of "qualified privilege" as that same source from earlier makes it clear what needs to be true to argue that: 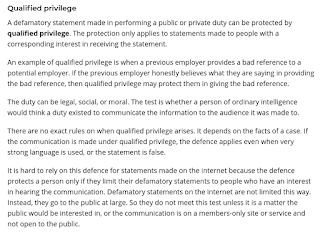 Again, I am not a lawyer, but I just don't see this defense applying here.
DOUBLE AFTERSNARK: Is it worth pointing out where Ezra single-handedly destroys his own defense of responsible communication? Of course it is.
As you can read above, that defense requires that "the journalist used reliable sources, and tried to get and report the other side of the story." And here's Ezra, openly admitting that he either never checked (or never re-confirmed) a fairly significant point, while admitting its obvious relevance:

One is free to imagine Ezra's lawyer(s) at their table, upon hearing this, looking for the nearest sharp object to slash their wrists.
Posted by CC at 6:13 AM

The Children of Ezra are having a rough time of it. Let's hope it's contagious. Tommy Robinson crashes and burns spectactularly (https://www.thetimes.co.uk/article/search-for-tommy-robinsons-assets-after-edl-founder-declares-bankruptcy-nbtk7v356), while his own serial litigations grind to a halt (https://uk.sports.yahoo.com/news/man-cleared-harassing-tommy-robinson-140540666.html?guccounter=1&guce_referrer=aHR0cHM6Ly93d3cuZ29vZ2xlLmNvbS8&guce_referrer_sig=AQAAAM5OQt5l-1xVEoJ4esNQroOuZYh-EMRRNtTEH8O4_w4UUGFkVR0jv0l3wopA0BIgNcxdnY41UeTkweYgpmNdQAz-zk5jau3KItisJm4tzEBsbF1ivrcehqafg-zfmAecpJ7VkXhDfIJ6PiE8eK-jNqGJp-tzz4FdWDXLvFAUV57K)