Currently, there is a savage and merciless pogrom on social media targeting anyone who is seen as being insufficiently sympathetic regarding the recent bus crash in Saskatchewan that took the lives of a number of young hockey players.

Ironically, many of those howling with indignation over this alleged lack of sympathy are the same yobs who thought Ezra Levant's grotesque and classless mockery of the death of Jack Layton ... 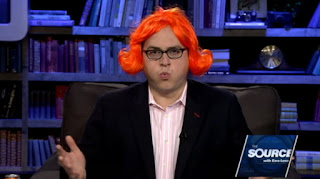 I just thought I should point out the logical disconnect.

AFTERSNARK: Many of the people weeping uncontrollably over the Humboldt bus crash and the loss of all that innocent, young life are the same ones suggesting that the Marjory Stoneman Douglas High School shooting survivors are a bunch of "crisis actors" who need to stop whining and man the fuck up and get over it.

I just thought I should point that out.

AFTERAFTERSNARK: Many of the drooling yahoos current sobbing inconsolably over the Humboldt bus crash are the same ones who bellowed: "1000+ missing and murdered indigenous women? Who the fuck cares, don't bug me with that shit."

I think you see the pattern here, right?
Posted by CC at 1:55 PM