When the party of Doug Ford doesn't want anything to do with you, you have a problem. 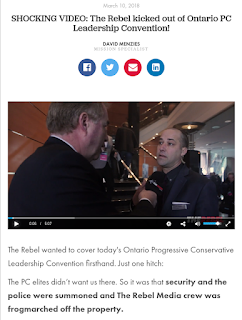 And here's David "The Menses" Menzies, finally facing up to the fact that he's not a real journalist.

P.S. I adore Menzies' mounting frustration in realizing he's being given the boot while no one is willing to explain why. Gosh, Dave, if you want to know how that feels, I'm right here.

UPPITY DATE: Oh, dear ... it would appear that Menzies has a pretty good idea why he had his sorry ass kicked to the curb by the Ontario PC party, since as you read here, Dave even admits he might know what the problem is:

If one follows that link, one can witness Dave acting like an absolute douchenozzle in questioning Caroline Mulroney, whereupon one wonders why Menzies is being such an ass, until one reads Ezra himself, openly bragging about how two of the other candidates paid thousands of dollars to Rebel Media to rent their mailing list for campaign purposes: 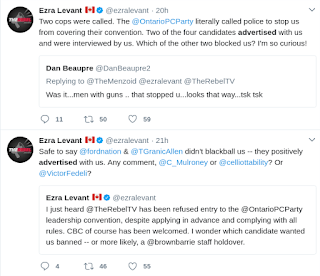 Under the circumstances, should it surprise anyone that Menzies went so aggressively after one of the candidates that didn't cough up the mailing list rental fee?

The message here from Rebel Media seems fairly clear: Advertise with us, or face the consequences. And David Menzies is learning what it's like for even the Ontario PC Party to have had enough of Rebel's bullying.

AFTERSNARK: It's unconscionable for an alleged "media outlet" to rent its internal mailing list to a subset of political candidates and thereupon actively promote those candidates through articles and on-air interviews, then show up at the leadership convention vowing that they're there to cover the proceedings fairly and objectively. But it's part and parcel of the media experience that Ezra Levant has foisted on the public: "Rebel Media: We make the news, then we cover it."
Posted by CC at 5:12 AM