Apparently, "Go die in a fire" is context dependent.

Just learned that my buddy Dr. "@caneshaker" Dawg was suspended from Twitter for a week for, a while back, telling piece of shit and reprehensible human garbage Jim "Gateway Pundit" Hoft to go die in a fire, after Hoft mocked the victims of the recent Florida shooting.

Apparently, telling pieces of shit like Hoft to go die in a fire and getting suspended for it is going around: 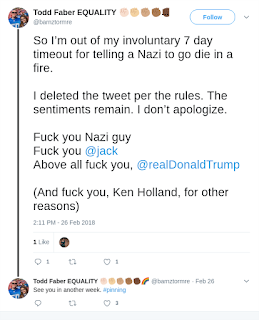 Luckily, Twitter is taking a hard line and treating everyone equally, oh, wait ...
Posted by CC at 12:04 PM