Is "Oil Patch Arm Candy" on her way out from Rebel Media? 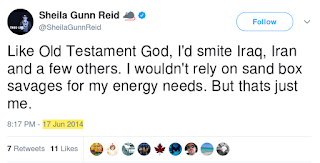 ... is set to jump ship from Rebel Media.

Let me emphasize that there is no supporting evidence for that claim contained in this e-mail, and I have absolutely no idea who sent it, but it would be a fascinating development. Let's just watch and see what happens.

P.S. Fascinating bit of speculation as to why Rebel's Tommy Robinson just bailed. Most interesting observation is that, with his criminal record, he wasn't eligible to enter the United States, and was therefore of very little value.
Posted by CC at 5:26 AM